The Genesis of "Genesis"

It's the 30th anniversary of the release of the Sega Genesis in North America. Looking back at this classic system, have you ever wondered where the name came from? You might be surprised to hear it came from Atari.

Before we continue, let's be clear which Atari we're talking about. It's not the original Atari, Inc., Atari Games, Hasbro Interactive, or the company formerly known as Infogrames. This is Atari Corporation, the company started by Commodore founder Jack Tramiel as Tramel (no "i") Technology Limited that acquired certain assets from the consumer division of Atari, Inc. It's the company that brought out the 7800 (to wide release), the Lynx, the ST, and Jaguar.

Programmer D. Scott Williamson, a former employee at Atari Corp's Chicago office, which was in charge of entertainment software at the time, posted some interesting information on the AtariAge forums in 2011:


We were originally hired to write games for the Tomahawk. That was the name that Sega gave their new MegaDrive system for North America. From what I know, Atari VP Larry Siegel had been brokering a deal where I believe Atari would be the North American (possibly worldwide) distributor for the system and its games. Sega was looking for an "aggressive American" name for the console, that's what led to the name Tomahawk, but we didn't like it very much. We had an office contest to see who could come up with a better name, I think the prize was a steak dinner. Steve Ryno came up with the name Genesis, either "as the console that would redefine gaming", or after the effect in the Star Trek 2 movie, either way it stuck. The deal later fell through and I don't know if Steve ever got his prize, but that's is seriously how the Sega Genesis got its name.

As for the name Tomahawk, that claim is further corroborated by old Usenet posts, including a copy-paste of a message originally posted by EGM founder/editor Steve Harris on the GEnie service. (This was also allegedly mentioned in EGM briefly, but I cannot find it.)

The deal between Sega and Atari Corp. went pretty far along, according to former Atari Entertainment Electronics Division president Michael Katz, but in the end Jack Tramiel and Sega's David Rosen couldn't agree on terms.
Posted by CRV at 9:48 PM No comments:
Email ThisBlogThis!Share to TwitterShare to FacebookShare to Pinterest

Some avid game players during the 16-bit era may remember a company called Telenet Japan. They, along with their various divisions and subsidiaries such as Wolf Team, put out cult favorites like the Valis series, Granada, El Viento, and Gaiares. But after cornering the sword-wielding schoolgirl game market with Valis, Telenet felt the need to take on the arcade business. Not arcade games, entire arcades.

More accurately, they were "amusement centers." In the early 1990s, Telenet planned to develop 10 of them overseas. They decided to build their first in Hawaii, hoping to attract 500 of the state's many Japanese tourists a day.

The new game center opened in early 1992. Called Cosmic Fantasy (presumably taken from the RPG series of the same name), it was officially referred to as a "restaurant & game resort," something along the lines of a Dave & Buster's. The architectural firm of Ferraro Choi and Associates was tasked with designing the 17,000 sq. ft. facility, located on the second floor of the Kalakaua Center in Honolulu. In addition to the games and the restaurant, there was also a bar, karaoke rooms, and even a radio studio, according to Ferraro Choi's website. (Ferraro Choi won an Award of Merit from the Honolulu chapter of the American Institute of Architects [AIA].) 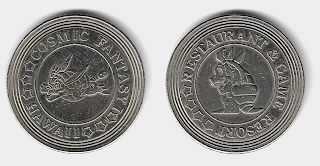 Telenet apparently felt they needed cute mascots. Rather than come up with new ones, they rummaged through their back catalog, and all they could find was the dinosaur couple from Dino Land, a pinball game by Wolf Team. The two dinos adorn the tokens (see right). It's unknown if they were used on anything else.

Unfortunately, there's not a lot of other information about this venture like how successful it was, or when it closed, or if it served Dino Land Dino Burgers in the restaurant. It cost $2 million to develop, though, and it was blessed by Rev. Abraham Akaka, "Hawaii's official blesser," on January 17, 1992.

There's no evidence Telenet opened any more of these places, or that they had any game centers in Japan. However, articles about Telenet closing in 2007 mention problems with a U.S. subsidiary's game center(s). A check of Telenet's old website turns up nothing. Was Cosmic Fantasy a drag on the company for years to come?

A vintage Usenet post by someone in Hawaii mentions an article on Cosmic Fantasy in Famitsu. One of the highlights was Sega's R-360 cabinets, which were $3 a play. A home movie uploaded to YouTube (here) shows an R-360 in action and plenty of Street Fighter II and pinball tables.